You are here: Home / food / Book Review: It Starts With Food by Dallas and Melissa Hartwig 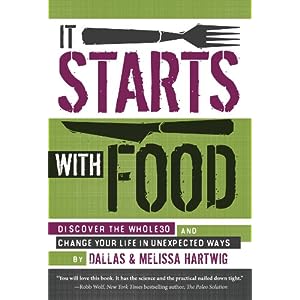 It Starts With Food, written by Dallas and Melissa Hartwig, is an attempt to explain their brand of the Paleo diet to a lay audience. The book lays out the scientific basis for the Paleo diet, including accessible explanations of “good” and “bad” foods, plus some information on meal planning and even a few recipes.

Dallas and Melissa’s strength is in their delivery. Just like in their seminars, the material is presented in an engaging and accessible way. They are excellent teachers, both in their presentations and their writing. Their factual information, filled with citations, is very well-written, and presents a solid case for the Paleo diet.

One caveat: There’s a “creationists welcome” box in the beginning of the book, stating that people who don’t believe in evolution can follow the program as well. Unfortunately, on an attempt to popularize the Paleo diet for a more general audience, this kills the credibility for a more scientific audience. I can think of a handful of people who might have been interested in the facts and research in this book–and even thought of picking up a copy for them–but that single 7-sentence box would be a deal breaker. (If you’re in the same boat, an alternative may be Robb Wolf’s “30 Day Total Transformation” e-book [not an affiliate link], which is a bit more hands-on than his amazing book, the Paleo Solution, but has all of the information necessary to get started. Or, if you’re looking for more of a cookbook, Everyday Paleo is very user-friendly.)

In the Paleo Solution, Robb Wolf laid out the case for following a strict Paleo diet for 30 days. Dallas and Melissa have taken it to a whole ‘nother level, advocating for people to do the “Whole30,” which is basically a strict Paleo diet for 30 days with a few added rules, often several times a year. This approach is a good one for people who are sticklers for detail and operate best with a lot of guidelines, with  little to no wiggle room. While there’s not strict weighing and measuring of food, It Starts With Food has a framework for what should fill one’s plate (and how big portions should be), something that I haven’t seen in other Paleo books to date. And the Whole30 program has a lot of rules to follow. Bacon, once deemed a poor choice, is now permitted on the plan, as long as it’s a Whole 30-approved brand. Butter is not acceptable, but ghee is. White potatoes are completely out, even if peeled. Any foods with carageenan are out. If you’re a smoker, you should quit smoking first before making dietary changes. And stepping on the scale while on the program is prohibited.

I followed a strict Paleo diet on 2 occasions–after reading the Paleo Solution, and when I wanted to try a Whole30 approach. I found that the strictness of the diet, and a slow reintroduction of foods, helped me gain a better understanding of exactly how grains work in my body. I think a strict Paleo diet (and slow reintroduction of non-Paleo foods) is something everyone should do at least once to figure out just how their body really handles things. But following strict Paleo diets on and off throughout the year for 30 days at a time is something that can lead to yo-yo dieting patterns, where you’re either doing a Whole30 or binging on junk food. Unless you’re very sick, I just don’t think it’s necessary. For many people, following the Paleo diet with a non-Paleo meal or snack a couple of times a week is probably far more healthy. For example, while some people might need to abstain from grains 100% of the time because of the reactions they have, others can handle small amounts of corn chips once every week or two. And I’ll readily admit I had a half-bar of chocolate every other week even while following the Paleo diet strictly for 30 days my first go-around…and the world kept spinning.

In addition, while some people may find comfort following predetermined portion sizes, I personally will never stick with a palm-size portion of steak when I’m hungry for more, or settle for half an avocado when a whole avocado is available because I’m small (I know how my body reacts to fat and protein–and it likes it). And while there’s definitely different factors at play with the number on the scale, I may choose to weigh myself during a program or not, regardless of the rules. Lastly, I  may be the only person who can’t stand clarified butter (ghee), but I don’t think I could ever force myself to eat it, so when I switch to a stricter Paleo diet (usually for just a couple of weeks at a time), real butter is included.

My recommendations for someone starting a Paleo diet would include sticking to it for four weeks the first time, forgoing butter (and ghee) for the time-being… but not everyone needs to follow details on portion size, or go back to following a strict 30-day program throughout the year. And while it might be easier for some people to make food choices under very strict rules, some might prefer the freedom of looking into research as well as how their body reacts to something and making their own decisions. Others might find comfort in following a scripted set of rules determined by someone else, but it’s worth thinking through what type of person you are before jumping head-first into something. If you need to operate within very strict parameters, the Whole30  may be for you–but if you’ve got a bit of an anarchist flair, some of the extra rules may be unnecessarily stifling.

I’d recommend It Starts With Food to someone who wants a scientific basis for following the Paleo diet, but in very easy-to-read and accessible language (or for creationists who want to follow a Paleo diet but don’t want to read about evolution). The program would work best for people who are sticklers for details and want to follow a very strict plan. Paleo aficionados may not learn anything new, but there’s some citations you may not be familiar with, and the explanations are interesting. I’m also looking forward to testing out the recipes, and will add an addendum with my thoughts on those once I’ve tried out a fair chunk of them. (Speaking of recipes, for some reviews of Paleo cookbooks, check out my May post, Paleo Cookbooks: A Roundup.)