You are here: Home / musings / Friday Musings: The Dovekeepers, and other random things 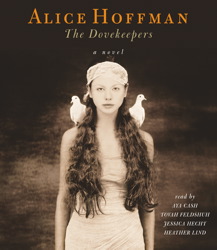 So I have a Google Alert on my name, and keep getting notified whenever anyone reviews this new book called the Dovekeepers… Unfortunately, my namesake appears to be this chick who hooks up with a married assassin, keeps doves as pets and is a cutter. And her parents didn’t love her. From the Seattle Times:

“‘The Dovekeepers’ begins with the narrative of Yael, a character who is at first unlikable. She has been rejected since birth by her father, who blames her for her mother’s death in childbirth. Then Yael falls in love with an assassin, with whose family she and her father flee Jerusalem after the Romans crush a rebellion there. She lives in a cave above the group’s camp and walks naked there, even having sex with her lover where his wife can see.

Yael depicts a perilous journey through the desert to the haven of Masada, an old fortress of King Herod’s that has stores of food and sits atop an enormous rock plateau protected by treacherous cliffs. There the Jews dig in.

Yael becomes one of the women who keep doves, for their eggs and to create fertilizer for the settlement’s fields. All of the narrators work in the dovecote.

…By the book’s end, all four characters are richly rounded, and Yael is as beloved as the others. In retrospect, her habit of cutting lines into her flesh to mark the grueling days in the desert — and probably her other actions there — also reminded her that she was alive.”